Known as the city of a hundred spires, architecturally magnificent Prague is emerging as one of the most popular European destinations for travelers seeking a walk through history and a vibrant contemporary scene. 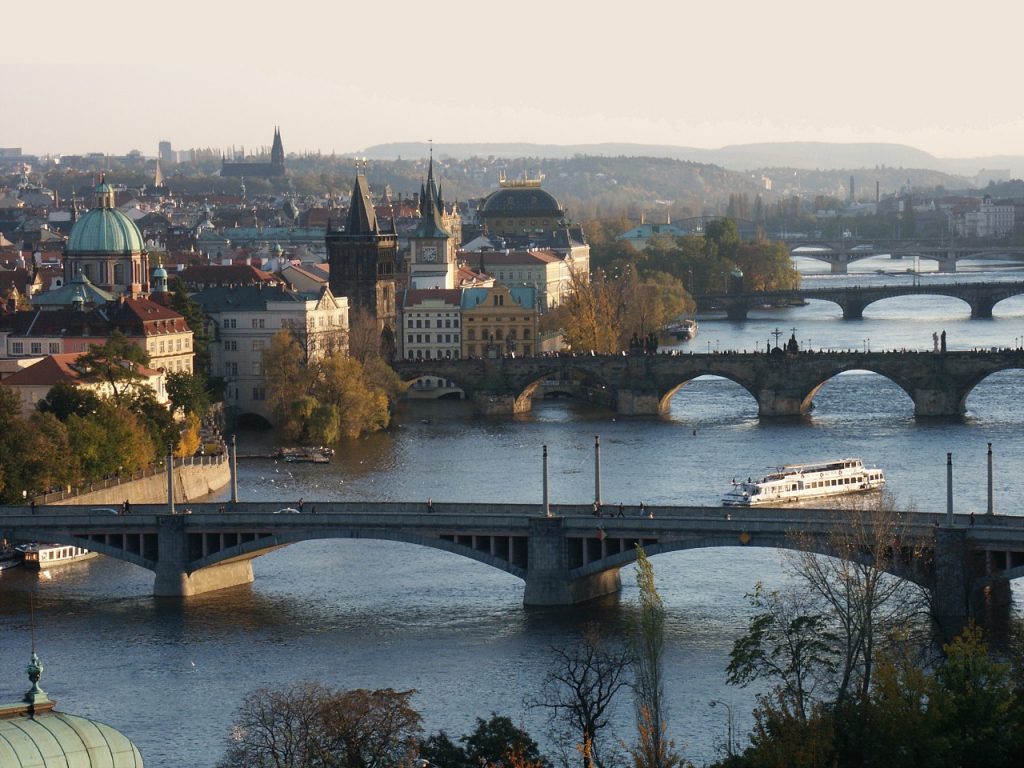 Prague, the capital city of the Czech Republic, is a bustling modern metropolis with perfectly preserved architecture dating back to the middle ages. Spared from the destructive bombings that leveled other European cities during the world wars, Prague’s historic buildings, bridges, churches, town squares, and winding cobblestone streets beckon visitors to step back in time.

“Prague offers a real-life architectural timeline. You can look at a street and see side by side a 1920’s Art Deco building next to one from hundreds of years before,” says Robert Wesley who is formally trained in architecture and leads history tours of Prague. 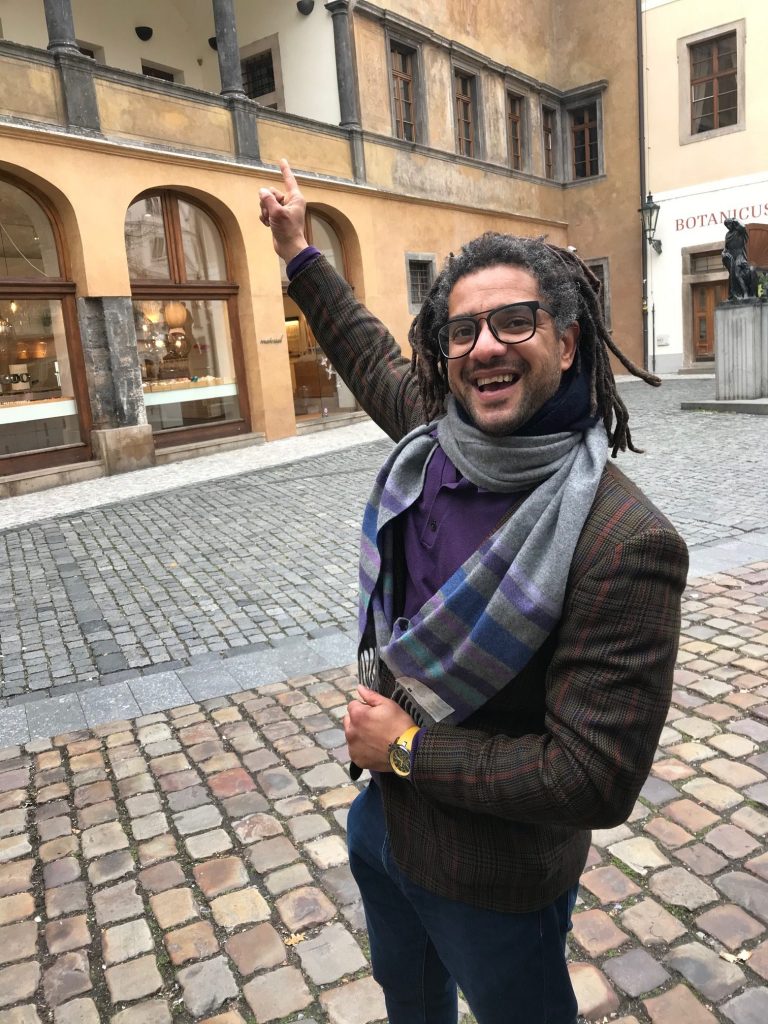 The cityscape is punctuated with striking contemporary structures too such as the Dancing House by American architect Frank Gehry, said to represent the dancing figures of entertainers Fred Astaire and Ginger Rogers.

A highlight of the walking tour past Gothic churches and baroque buildings includes the medieval Astronomical Clock Tower in the vibrant Old Town Square. Be prepared to share a view of the hourly chiming with scores of other onlookers with cameras poised to catch the clock’s animated figures of the 12 apostles and a skeleton ringing a bell to mark the passage of time.

Wesley says, “This was state of the art technology when it was built in 1410 and it still works!” 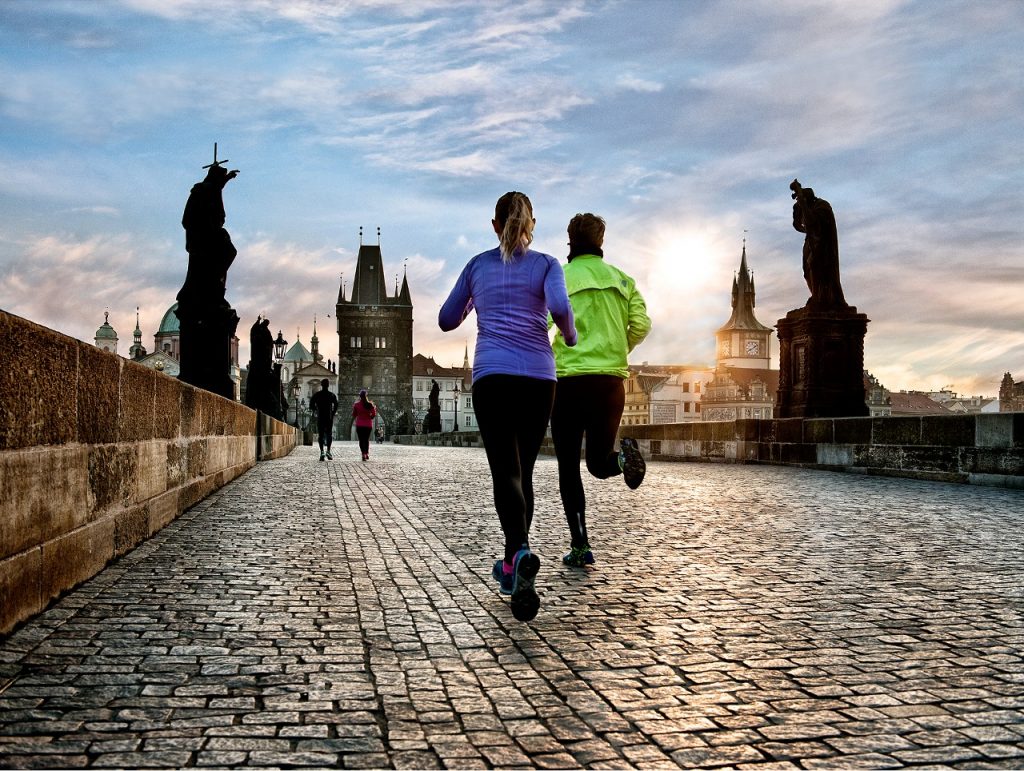 Other musts are a stroll or a run across the lovely pedestrian-only 14th century Charles Bridge built by Charles IV, which is lined with statues of Catholic saints.  Then spend time wandering around the spectacular 9th century Prague Castle with landscaped gardens and vistas of the city below.  This fairytale-like castle complex, where you can watch the changing of the guard, is the official office of the President of the Czech Republic and was the seat of power for Bohemian kings and Holy Roman emperors.   The city’s Jewish Quarter with five synagogues surviving after the Nazi occupation in World War II celebrates the richness of Jewish life and culture.

Other places to discover are the Franz Kafka Museum, dedicated to Prague-born writer and the relatively new phenomenon called The Lennon Wall where social expression through graffiti art is on display. 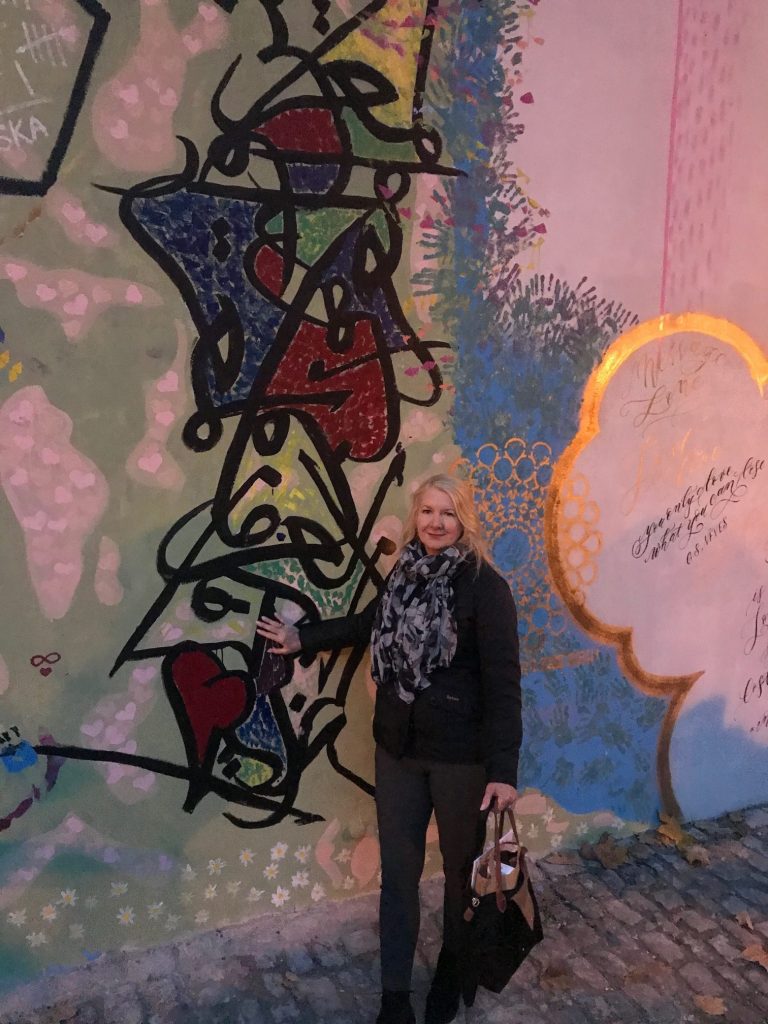 The city of Prague is a museum in itself. The entire historic center, on both sides of the Vltava river which divides the city, is so well preserved that it was granted UNESCO World Heritage protected status in 1992.

Since Czech beer is considered among the best in the world, there’s no shortage of beer halls and even guided pub tours. The food is simple but after centuries of practice roasting pork, making bread dumplings and fermenting sauerkraut they do it well.

Also globally recognized is the superior quality of crystal made in the Czech republic. From the tiniest bud vase to the most stunning chandelier, Bohemian handcrafted crystal can be found in many shops, but one of the most respected Czech crystal makers, founded in 1857, is Moser.  Even Queen Elizabeth shops there. 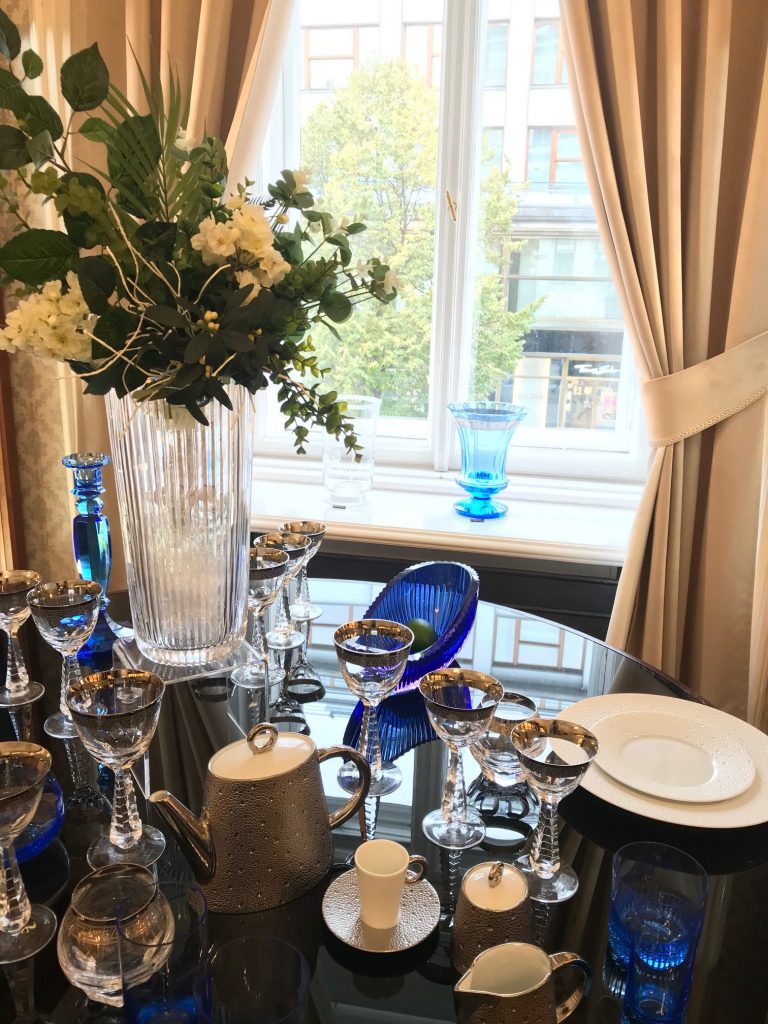 The not too long ago dark days of history are reflected in Prague’s story as well. Nazis occupied the city during World War II, the communists took over in 1948 and then the Soviets rolled in with tanks to take over in 1968. 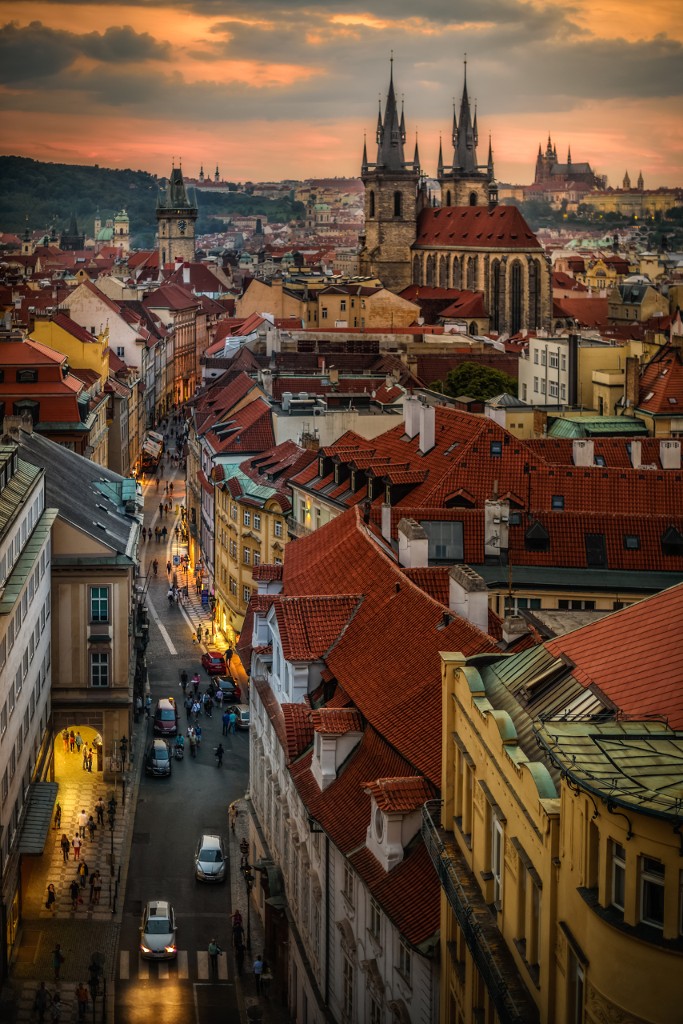 The city was all but sealed off to western visitors until 1989 when inspired by the fall of the Berlin Wall, the so-called ‘velvet revolution’ peacefully swept the former communist regime out of power.  Museum exhibits and public banners and displays around Prague today commemorate the heroes who brought on the end of communism thirty years ago.

At the very center of it all, as a microcosm of the city’s ups and downs and rebirth again is the historic Alcron Hotel Prague. Dating back to 1932, the Art Deco design hotel is within walking distance of iconic landmarks. But it’s what’s inside the building with marble staircases with copper railings, priceless art collections, and over 200 rooms and suites, lavishly decorated with Art Deco furnishing and all of the comforts of modern technology that reveals the true magic of this place. 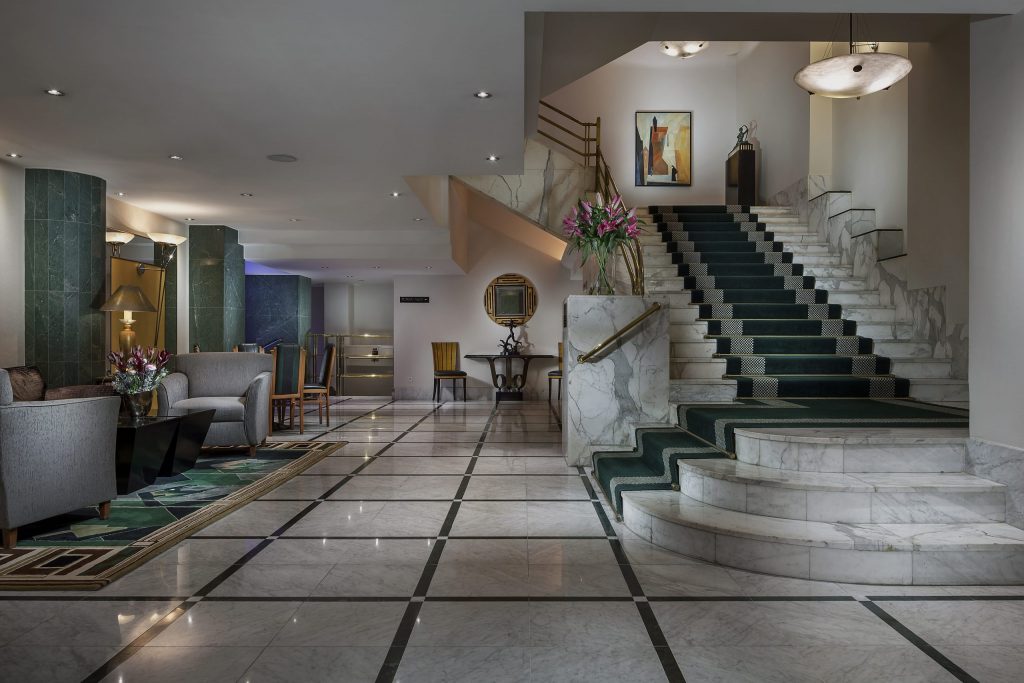 Today, the now independently owned Alcron Hotel Prague has risen once again to be part of the bright future of travel for business and pleasure to the Czech capital while holding on to the mission of its roots by dazzling guests with the finest accommodations and service. In the 30’s founder and owner Alois Krofta, a building engineer by trade designed electrical innovations including automatic fire-fighting devices and a special signal system for guests to call room service that put the hotel in a class of its own at the time.  The Alcron became ‘the’ place to stay in Prague for the rich and famous, from maharajas to movie stars. 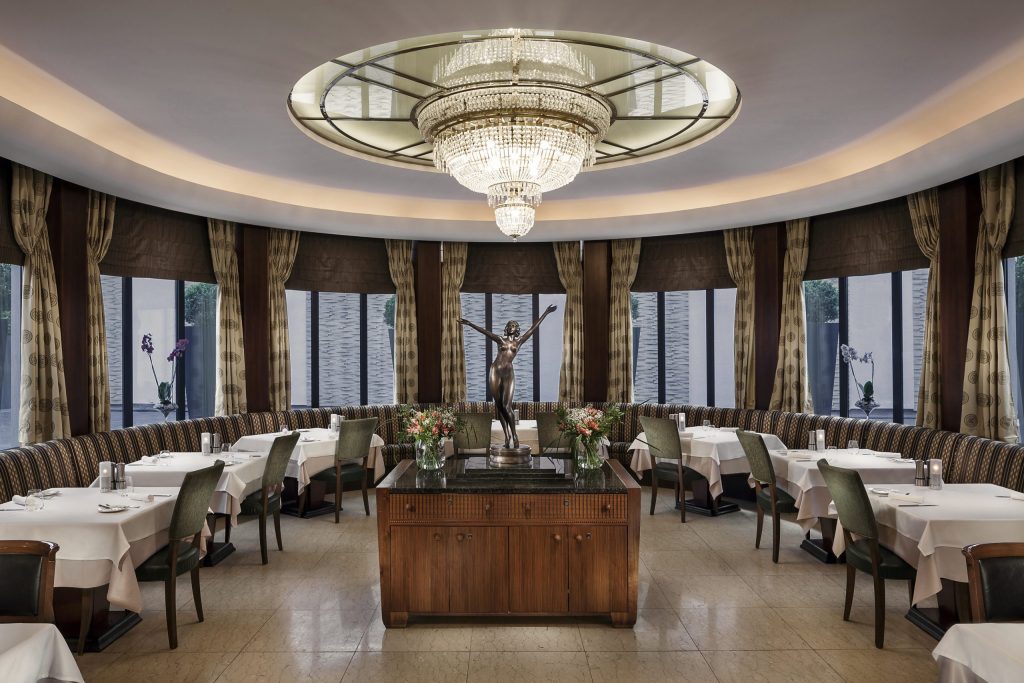 The name and logo of the hotel came from his initials (AL-ois KRO-fta), which were inspired by the word “alcron”, a sailing vessel in Greek mythology.

Czech Art and Art of Cuisine 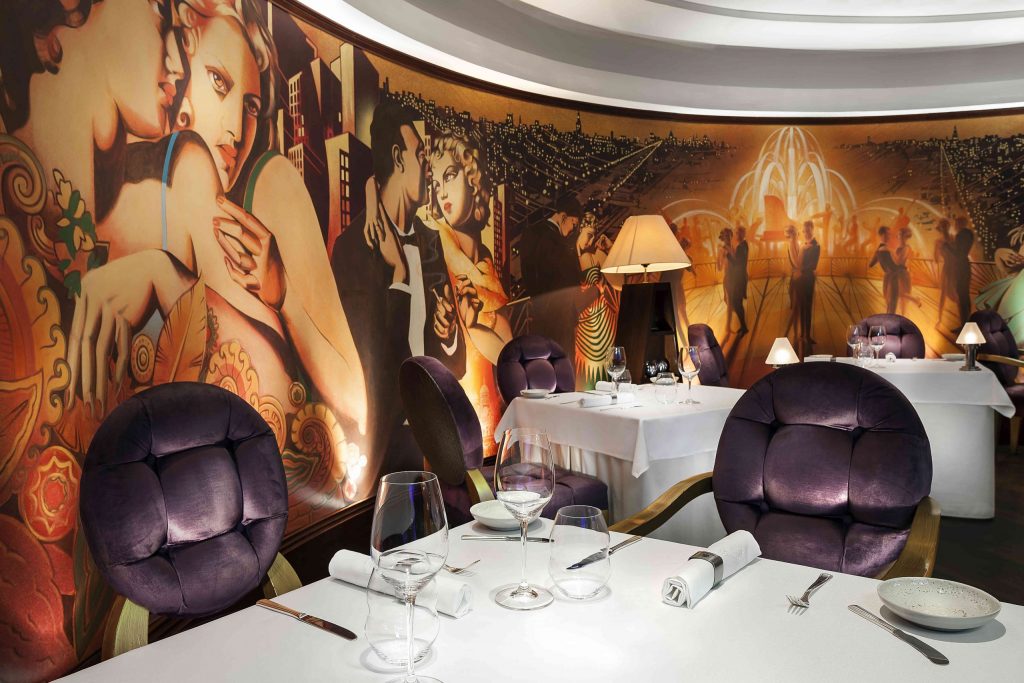 Replicas of the ship logo can still be found throughout the hotel and on the original 1932 fireplace door in the tiny Alcron Restaurant, which is adorned with bold murals of dancing couples and city skylines.  Known for being at the forefront of Prague’s culinary scene, multi-course tasting menus feature elegant dishes such as veal sirloin with morel mushrooms served with a vintage Bordeaux. 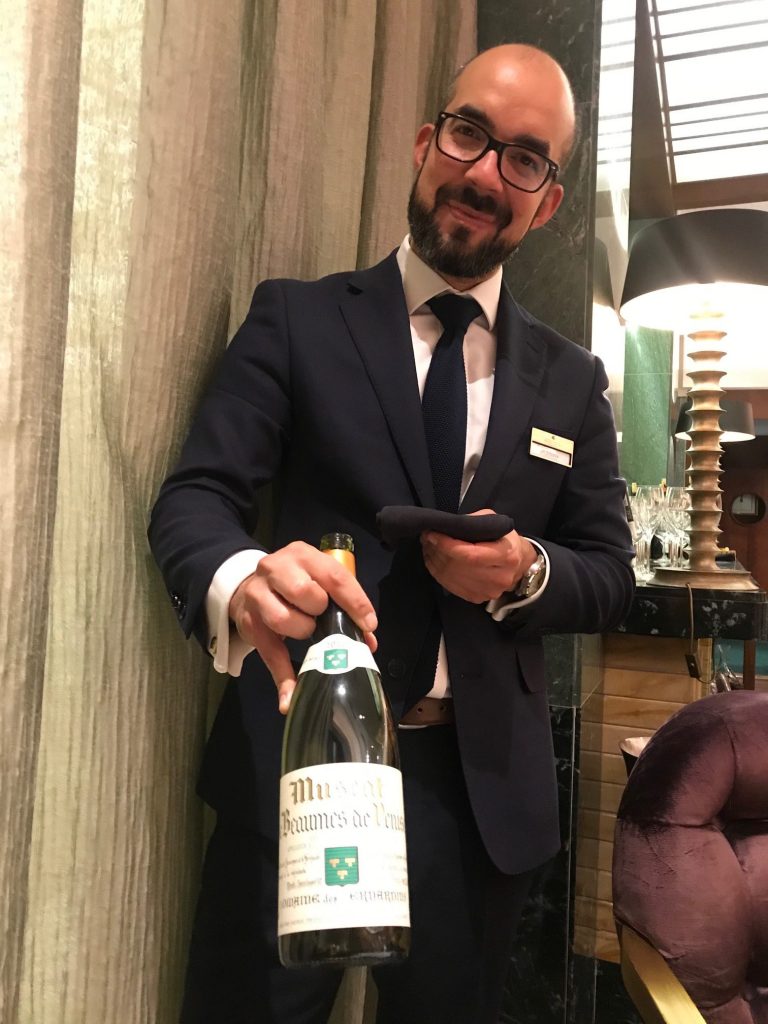 More impressive art greets guests in the hotel’s La Rotonde restaurant, where the focal point is a bronze sculpture of a young Prima Ballerina, who once graced the stages of Prague. Traditional Czech specialties such as beef goulash and veal schnitzel are served here as well as elaborate weekend brunches. 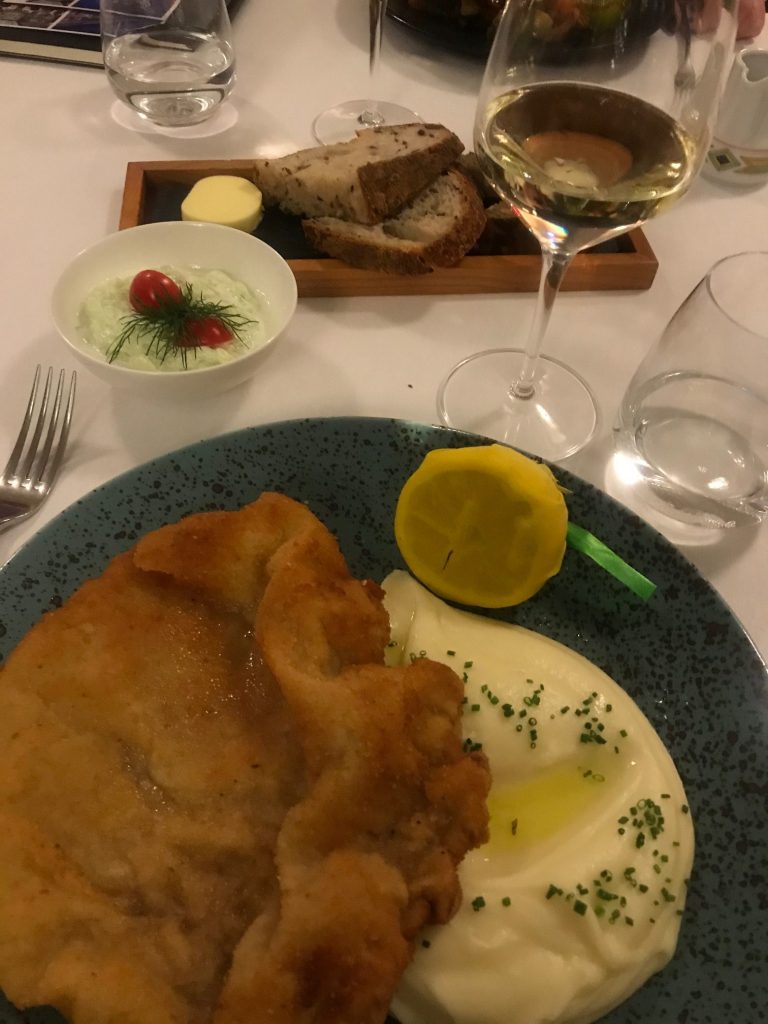 Another culinary specialty of the Alcron is offering Czech cooking classes taught by the hotel’s chefs. How about light as a cloud dumpling filled with strawberries for dessert? 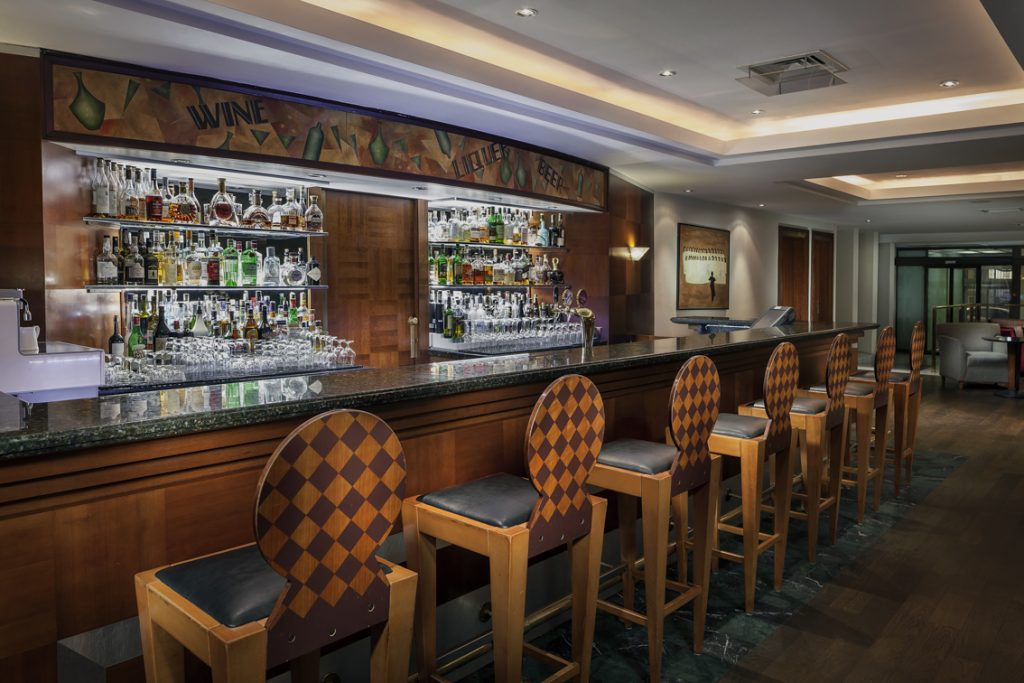 More inventive tastes are served in the Alcron’s buzzy Be Bop Bar, specializing in creative mixology where guests add the final touches to their themed cocktails with props such as a lipstick filled with rhubarb liqueur, or a toothpaste tube filled with raspberry puree. 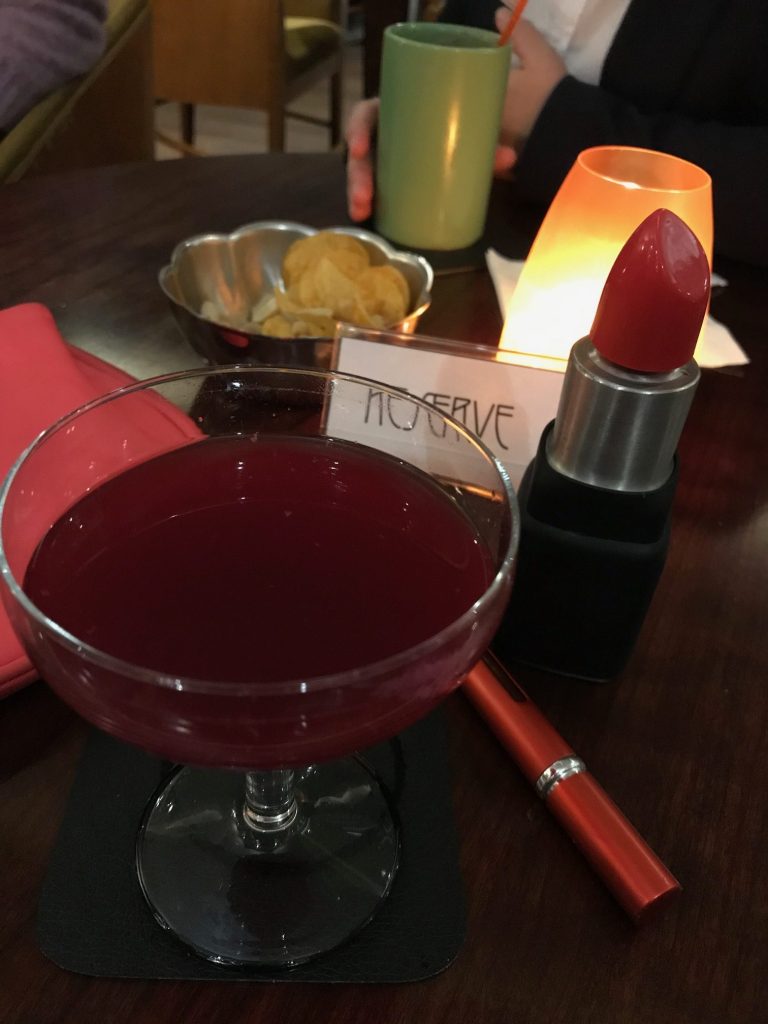 Certainly, times weren’t always this pleasant at the Alcron, but the stories are intriguing. Communist secret agents bugged the ashtrays to spy on guests.  Actress Shirley Temple Black who was at the hotel on the night of the Soviet invasion in 1968, was evacuated to Germany by the American Embassy.  She later became the U.S. Ambassador to what was Czechoslovakia in 1989.

So much to reminisce over cocktails or local beers at the Be Bop Bar! 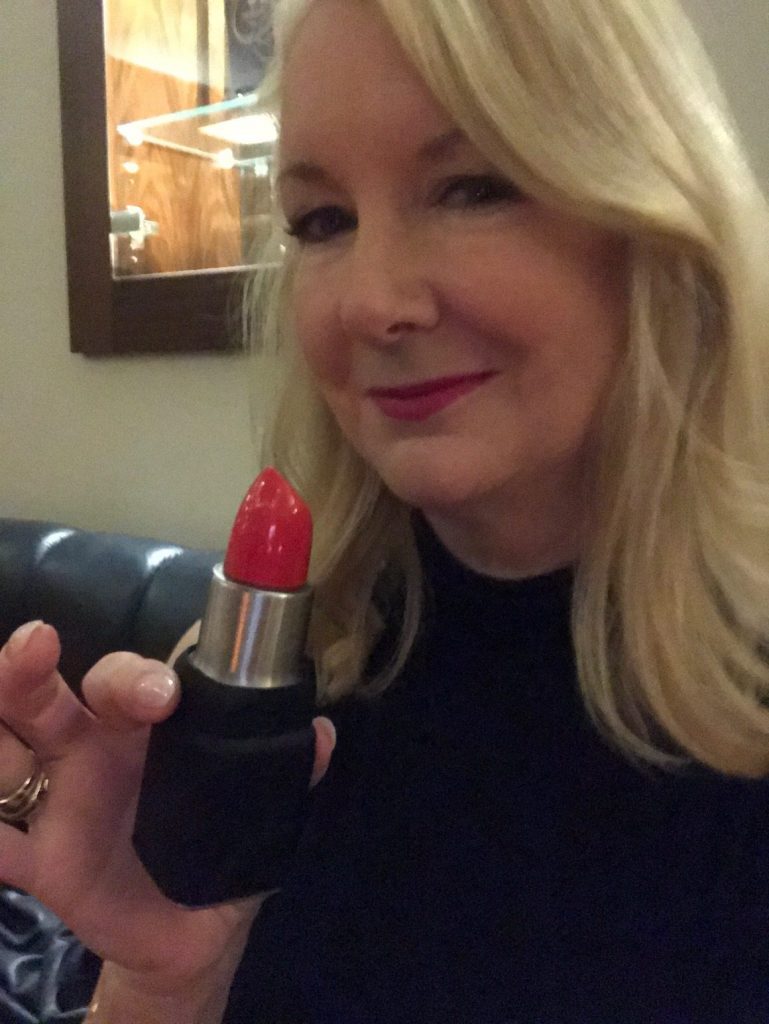 About
Carolyn O'Neil
Award-winning food journalist, blogger, nutrition communications consultant, television personality and registered dietitian nutritionist, CAROLYN O'NEIL MS RDN LD, believes “The More You Know, The More You Can Eat!” Carolyn supports Delta Air Lines as the company’s registered dietitian nutritionist. Carolyn is the author of Southern Living’s best selling The Slim Down South Cookbook: Eating Well and Living Healthy in the Land of Biscuits and Bacon and co-author of The Dish on Eating Healthy and Being Fabulous! winner “Best Health and Nutrition Book” at the World Food Media awards. Carolyn writes for the numerous publications including Atlanta Journal-Constitution, WebMD Magazine, Modern Luxury Magazines, Atlanta Homes & Lifestyles Magazine, VIE Magazine, and Best Self Magazine. She is a contributor to Thrive Global.com. An award-winning television journalist, Carolyn is seen regularly on NBC Atlanta & Company with food and nutrition-focused cooking segments. She can also be seen as “The Lady of the Refrigerator” TV nutrition expert on Alton Brown’s Good Eats and Good Eats Reloaded on Food Network wearing a tiara and pale blue ball gown. Carolyn has earned three James Beard Foundation Awards, including Who’s Who in Food & Beverage in America. She has been honored by the National Restaurant Association, the American Heart Association, the American Society for Nutrition and the Academy of Nutrition and Dietetics for her pioneering work in nutrition communications. Carolyn was a correspondent and anchor at CNN for nearly 20 years, launching the network’s coverage of food and nutrition. Her master’s degree in Nutrition and Communication is from Boston University and an undergraduate degree in Foods and Nutrition is from Florida State University. Carolyn lives in Atlanta. Follow her on Instagram @carolynoneil
Related Posts
Copyright All Rights Reserved © 2019 - The Happy Healthy Kitchen | Hosted & managed by Omni-Solutions Technology Consultants | theme by: Tomorrow Pictures Inc.
Contact Us

We're not around right now. But you can send us an email and we'll get back to you, asap. We promise!!