Farm to Fork: All About Pork 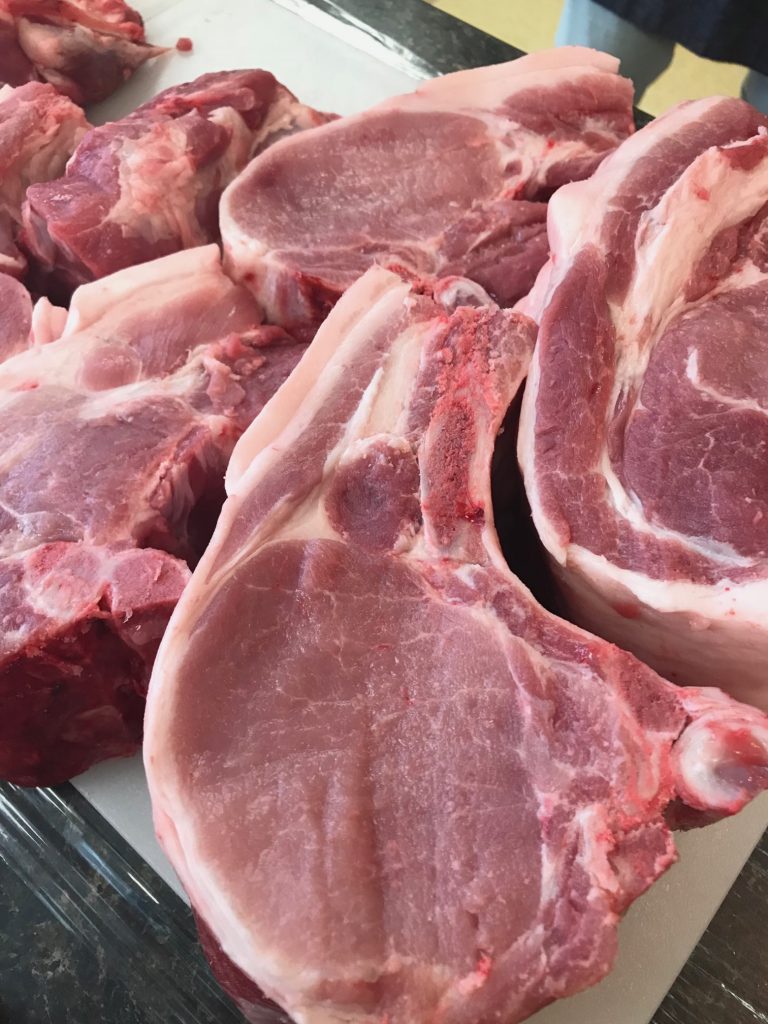 Remember when we used to hear the phrase “Pork: The Other White Meat” ?  Well, that’s when pork was competing with poultry to get the message out that lean pork has roughly the same amount of total fat and saturated fat as white meat chicken.  But today the phrase has moved on to “The Redder the Better” to let consumers know that the red color in fresh pork indicates good quality in taste, texture and nutrition. 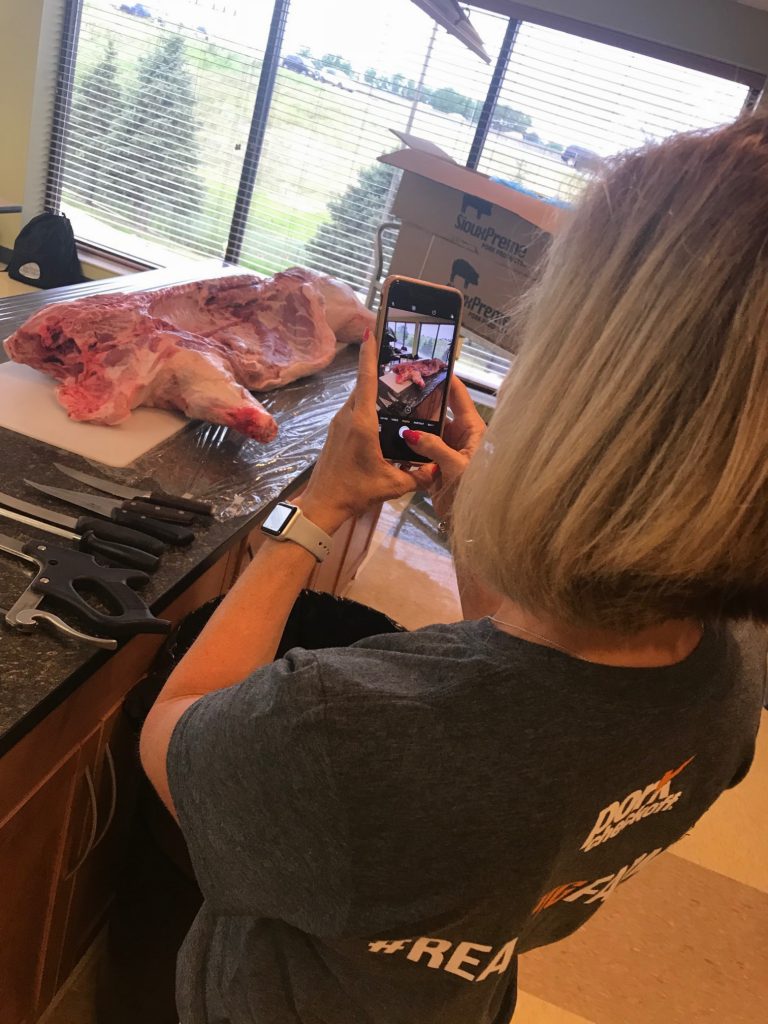 I learned a lot about today’s pork production and the good news on pork nutrition during a recent trip to Des Moines, Iowa where they know a thing or two about pork – Iowa is the number one producer of pork in the USA. Next in production is North Carolina. 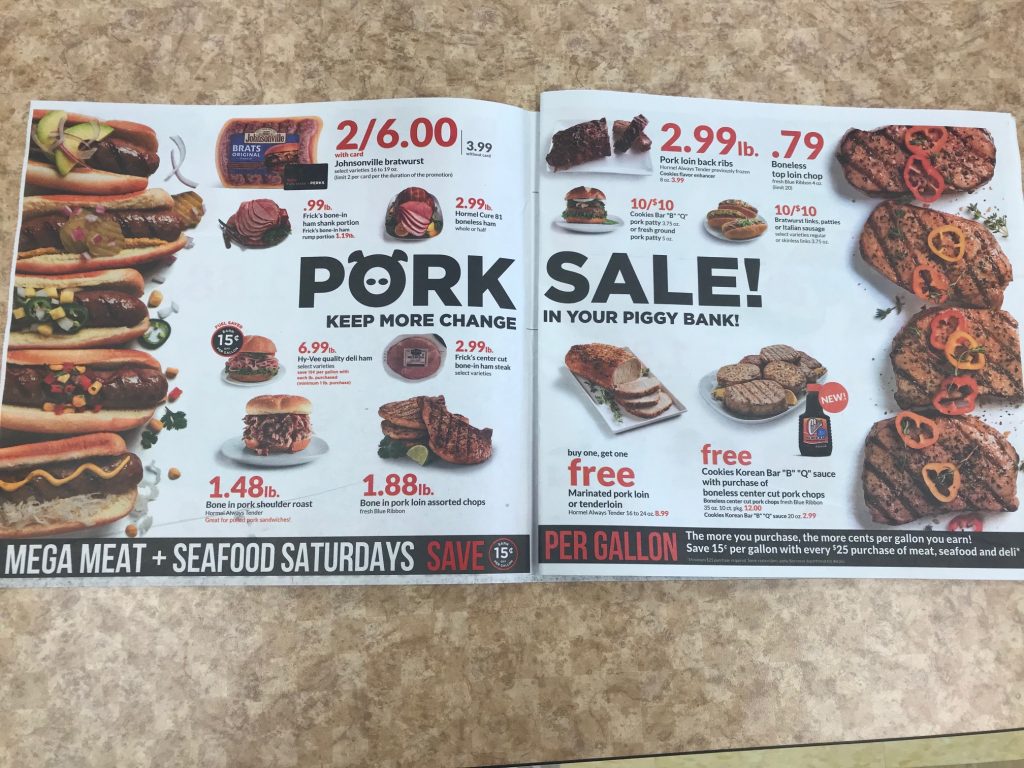 Pork is a big deal in Iowa. Check out this two page ad in the Hyvee supermarket circular.

Since so many of us want to know more about where our food is coming from and how it’s produced I decided to accept the invitation of the National Pork Board to join a group of registered dietitian colleagues to visit a pig farm, learn about animal welfare, pork production and get into a cooking class to create some wonderful recipes for a delicious lunch starring…you guessed it….Iowa pork! 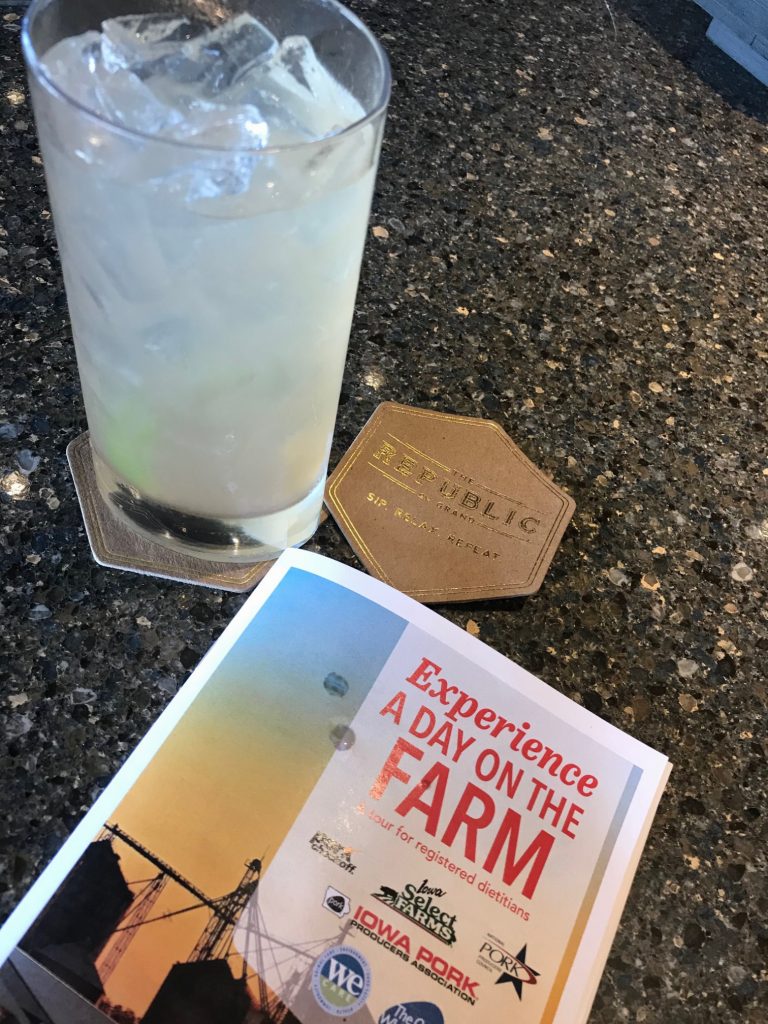 So did you know that when you visit a pig farm you have to take a shower before meeting the piglets and the moms? Yup. It’s to protect the health of the animals from the potential germs visitors might bring onto the farm. So after learning about Biosecurity from the pork producers, we showered “in” and then after spending time with the little pigs we showered “out” to make sure we weren’t taking any germs from the farm out into the world that might end up on another farm. They’re very careful about taking good care of the animals throughout their lifecycle. 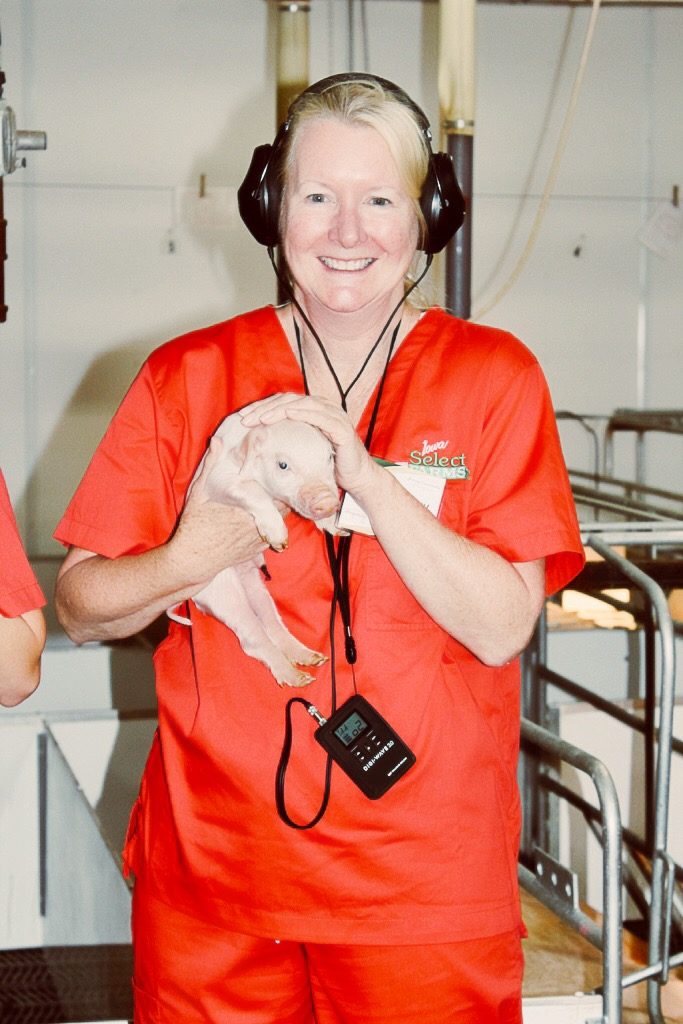 No makeup and in clean scrubs to meet the little piglets. I’m wearing a head set to hear our tour guide, the pig farmer, because filtered fresh air is pumped through the building. 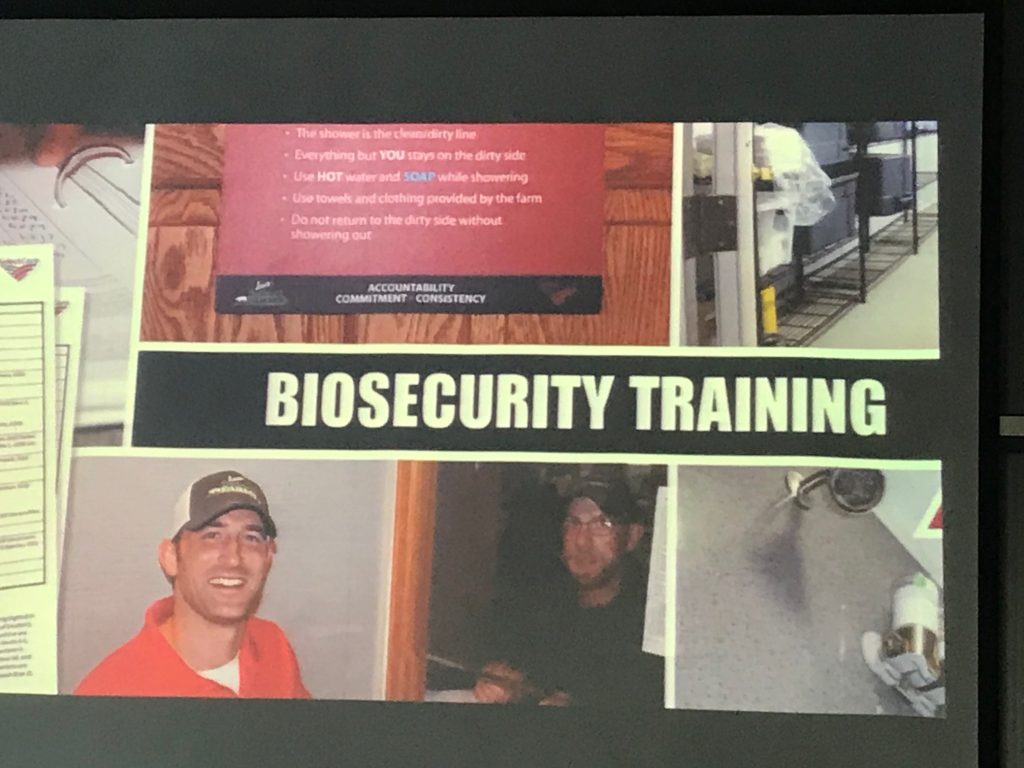 Biosecurity measures on pig farms today including shower in and shower out for visitors, positive pressure filtered air and other measures have helped to increase the number of healthy animals raised to go to market. It also means less use of antibiotics to treat sick animals.  Pigs are raised indoors in Iowa and most states to protect them from super hot weather in summer, super cold weather in winter and the natural pathogens and predators that might prey on the pigs. They have constant access to clean water and are fed on a schedule regulated by veteranarians who specialize in animal nutrition.  Keep in mind that all pork in your supermarket on restaurant menus today is antibiotic free. There are no residues of antibiotics allowed in meats at all. If a farmer uses an antibiotic to treat a sick animal, the animal is either removed from production or the strictly specified number of days are followed for the antibiotics to be gone from the animal’s system. 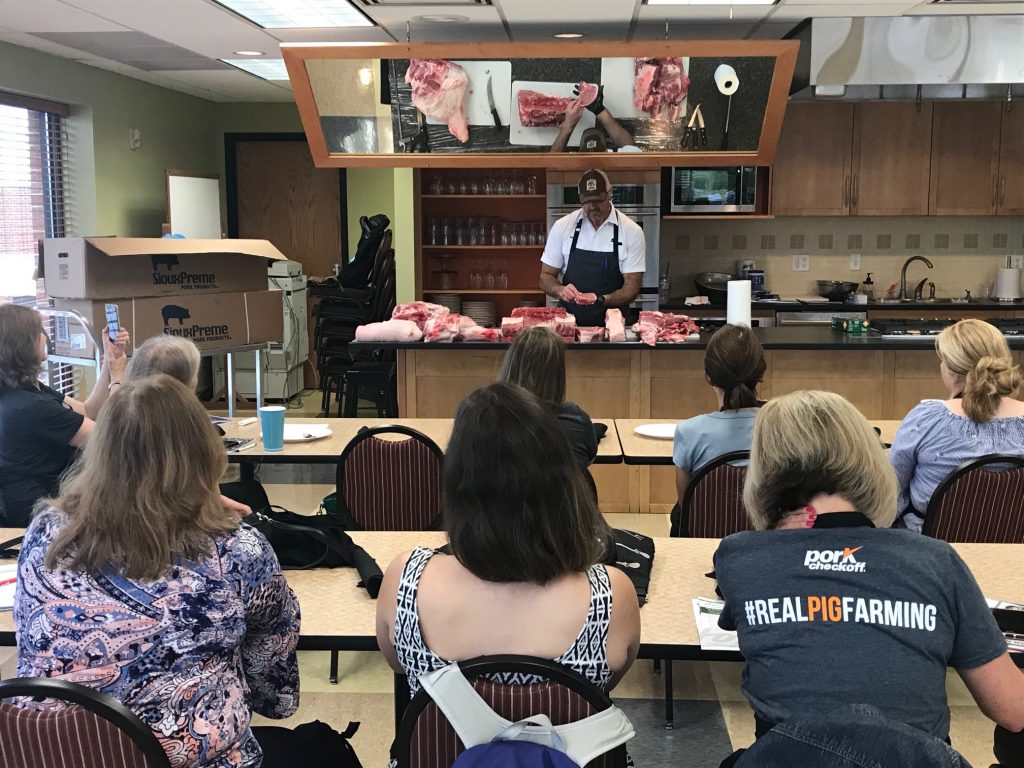 Sure pork is a great source of protein, but it’s nutrient rich in so many other categories too including vitamins and minerals. Check this out: A 3-ounce serving of pork is an excellent source of thiamin, selenium, niacin, vitamin B6 and phosphorous. And it’s a good source of riboflavin, zinc and potassium

Plus, did you know that today’s most popular cuts of pork have less total fat and saturated fat than they did decades ago? In fact, lean cuts of pork like the ‘loin’ cuts like tenderloin, loin chops and pork loin are recognized by the American Heart Association as a “heart healthy food”! 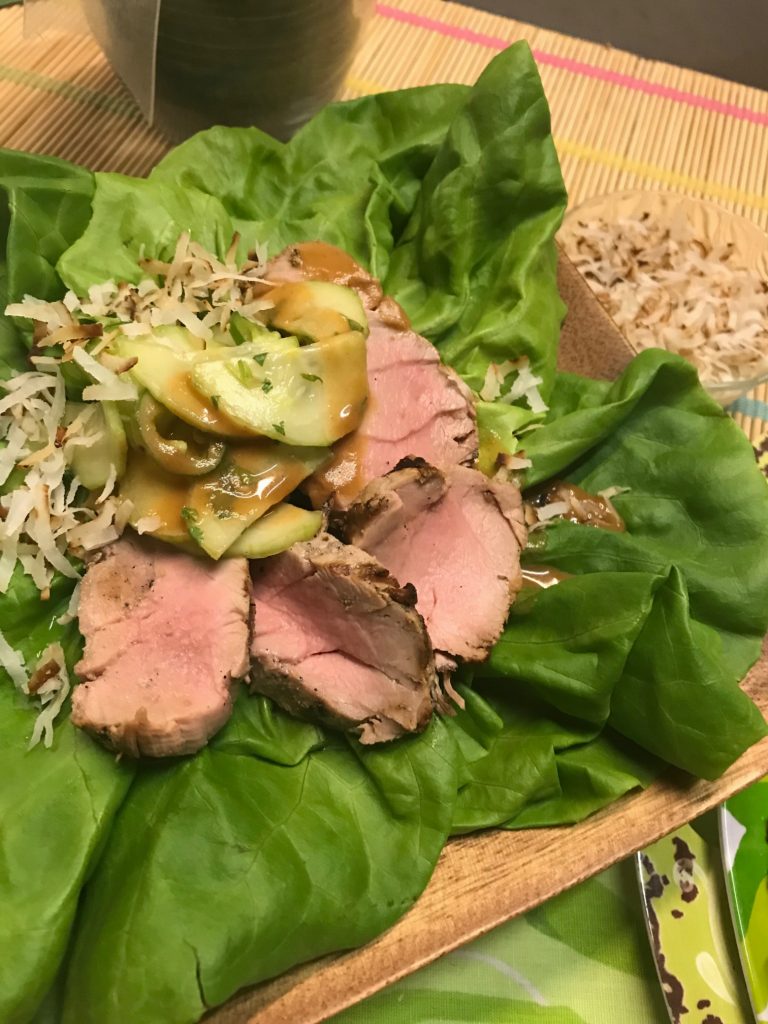 Because pork cuts are leaner than they used to be and especially when choosing loin cuts make sure NOT to overcook pork. According to the National Pork Board, (as set by the US Department of Agriculture food safety experts) pork should be cooked to an internal temperature of 145 degrees F with a 3 minute rest as it continues cooking a bit. This will give you a tender, succulent piece of pork and it will be slightly pink as in the photo above.  Use an instant read meat thermometer to easily see if the meat has reached 145 degrees F.   The only difference is when you’re cooking ground pork, as with all ground meats, the internal temperature should be 160 degrees F. 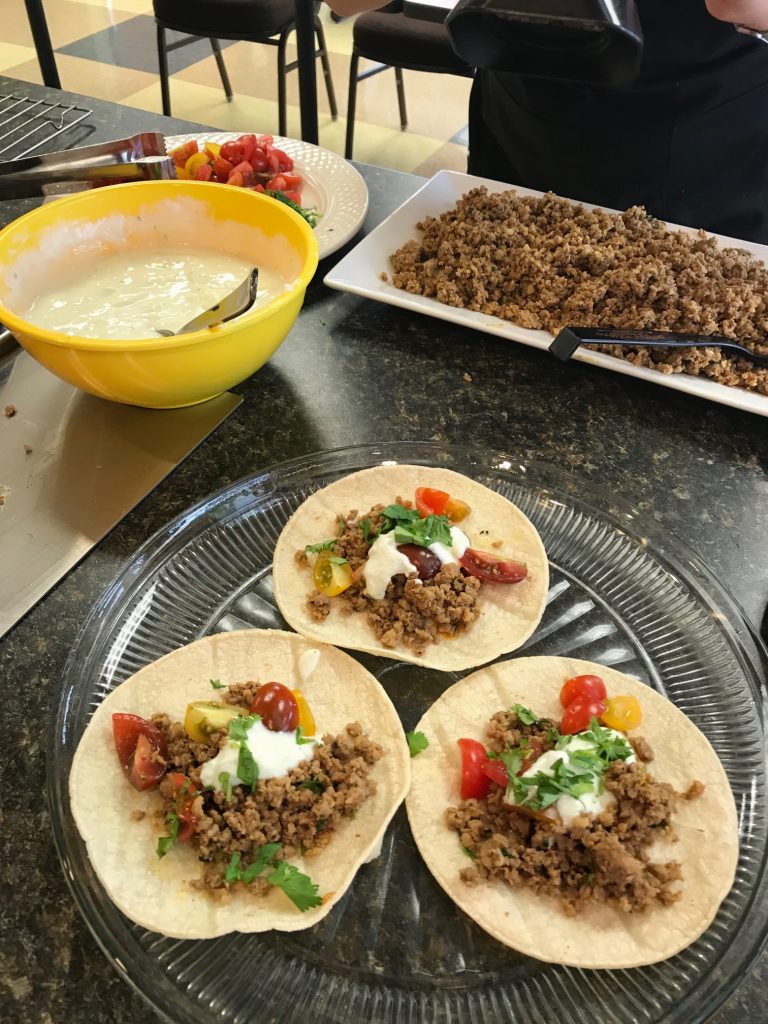 Ground pork with delicious spices and served with cucumber raita stars in Tandoori Pork Tacos. (scroll down for recipe below)

During our trip to Des Moines and Iowa pig farms we were treated to a tour of the test kitchens at Meredith Publishing, home of Better Homes & Gardens Magazine and so many more great food and lifestyle publications. 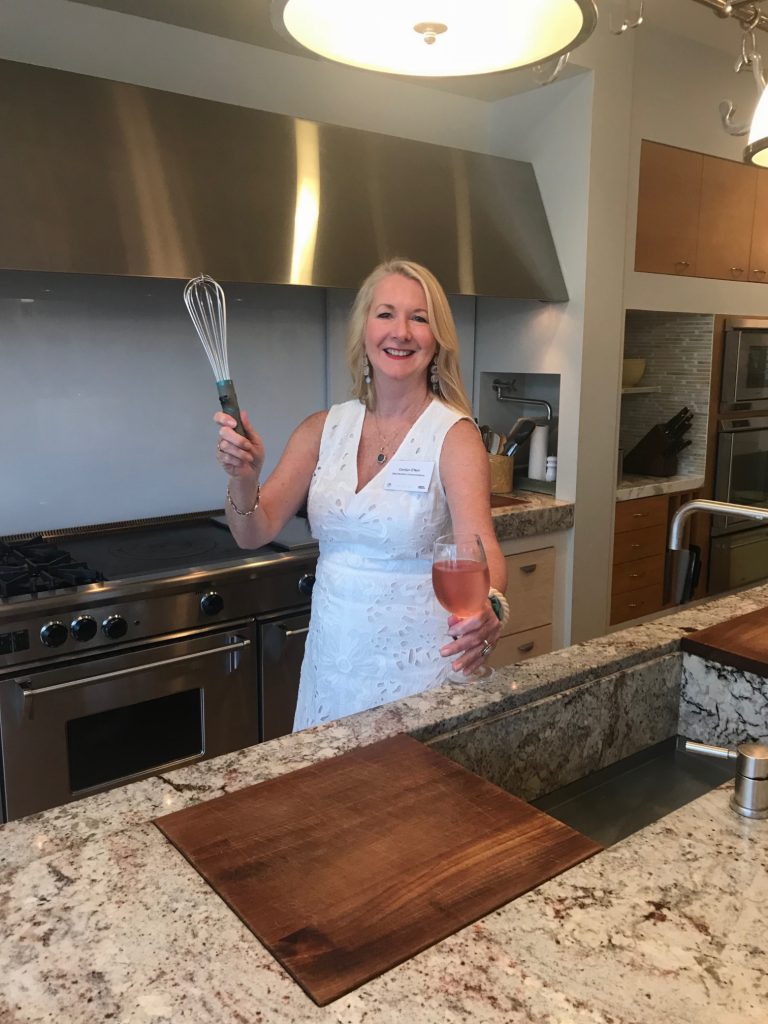 How many of you have the iconic red and white gingham covered Better Homes & Lifestyles Cookbook? The library at Meredith has a collection of these books for home cooks that spans the decades. 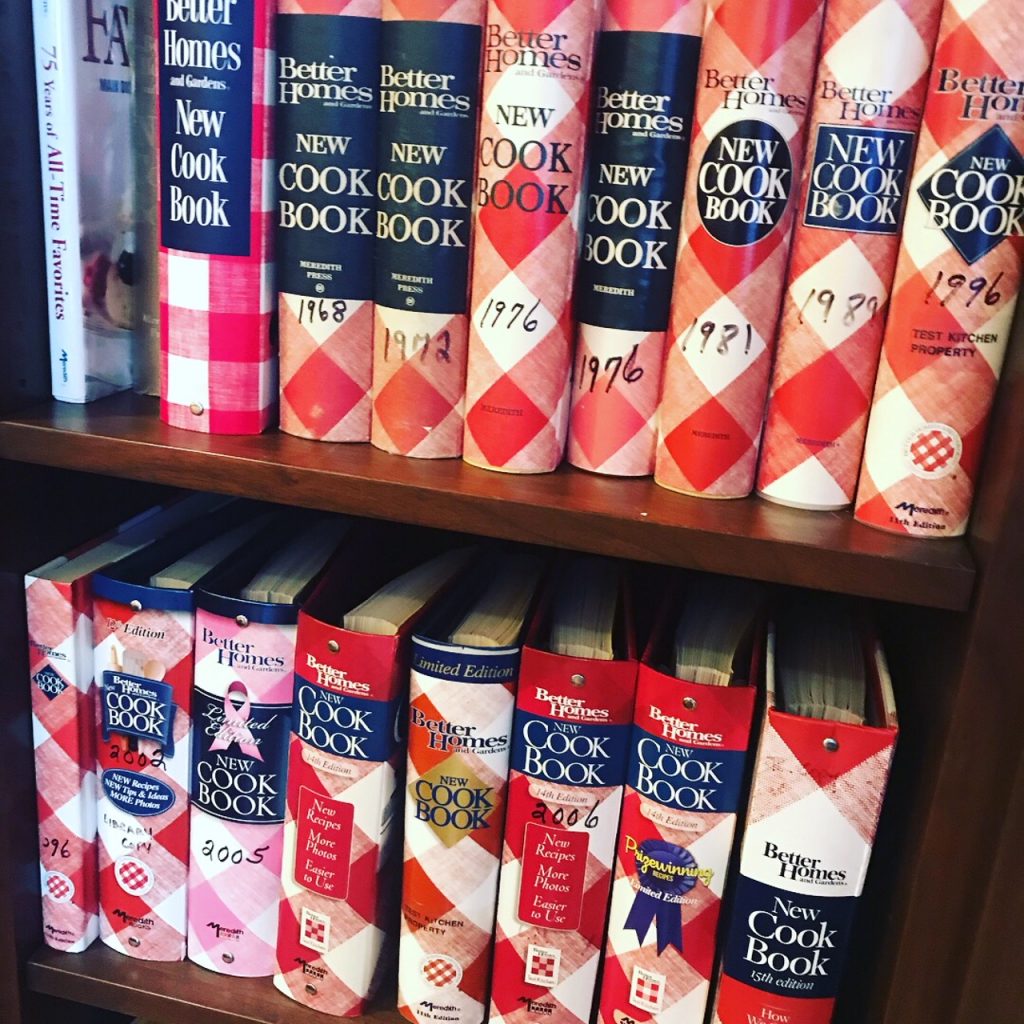 Speaking of Recipes here are the Two Pork Recipes I promised you in the photos above.

And if you’d like to see them on NBC Atlanta & Company here’s a link to that TV recipe demo. 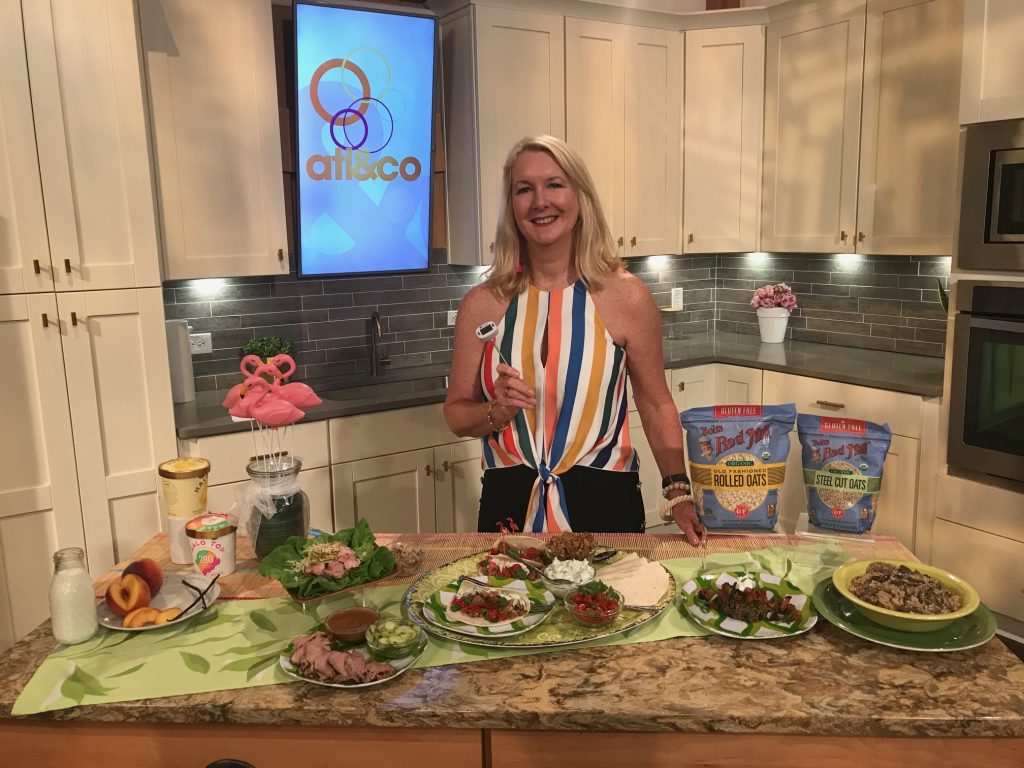 Toast cumin and coriander until fragrant. Add all ingredients to a mixing bowl and let sit for 30 minutes covered in a refrigerator. In a skillet over medium-high heat, preferable non-stick, add meat without oil and let cook for 5-7 minutes until a dark crust is formed. Break up meat with a spatula and stir until meat reaches 165F. Finish with a squeeze of lemon.

About
Carolyn O'Neil
Award-winning food journalist, blogger, nutrition communications consultant, television personality and registered dietitian nutritionist, CAROLYN O'NEIL MS RDN LD, believes “The More You Know, The More You Can Eat!” Carolyn supports Delta Air Lines as the company’s registered dietitian nutritionist. Carolyn is the author of Southern Living’s best selling The Slim Down South Cookbook: Eating Well and Living Healthy in the Land of Biscuits and Bacon and co-author of The Dish on Eating Healthy and Being Fabulous! winner “Best Health and Nutrition Book” at the World Food Media awards. Carolyn writes for the numerous publications including Atlanta Journal-Constitution, WebMD Magazine, Modern Luxury Magazines, Atlanta Homes & Lifestyles Magazine, VIE Magazine, and Best Self Magazine. She is a contributor to Thrive Global.com. An award-winning television journalist, Carolyn is seen regularly on NBC Atlanta & Company with food and nutrition-focused cooking segments. She can also be seen as “The Lady of the Refrigerator” TV nutrition expert on Alton Brown’s Good Eats and Good Eats Reloaded on Food Network wearing a tiara and pale blue ball gown. Carolyn has earned three James Beard Foundation Awards, including Who’s Who in Food & Beverage in America. She has been honored by the National Restaurant Association, the American Heart Association, the American Society for Nutrition and the Academy of Nutrition and Dietetics for her pioneering work in nutrition communications. Carolyn was a correspondent and anchor at CNN for nearly 20 years, launching the network’s coverage of food and nutrition. Her master’s degree in Nutrition and Communication is from Boston University and an undergraduate degree in Foods and Nutrition is from Florida State University. Carolyn lives in Atlanta. Follow her on Instagram @carolynoneil
Related Posts
Copyright All Rights Reserved © 2019 - The Happy Healthy Kitchen | Hosted & managed by Omni-Solutions Technology Consultants | theme by: Tomorrow Pictures Inc.
Contact Us

We're not around right now. But you can send us an email and we'll get back to you, asap. We promise!!